Institute of Food and Agricultural Sciences

Sorghum is genetically very diverse, is an important staple crop in continental Africa and Asia, and is the fifth largest grain crop following rice, corn, wheat, and barley. It has advantage as energy sorghum because of its high biomass production and adaptation across semi-arid tropical environments. Similar to sugarcane, some sorghum genotypes partition large amounts of sugars to their stems and therefore classified as sweet sorghum. Sugars accumulated in the stems can be expressed as juice which can be directly fermented to ethanol. In contrast, corn grain conversion requires an intermediate step to convert the starch in the grain to sugars before fermentation is possible. According to Agribusiness week (2008) estimated costs for production of 1 gallon of ethanol from sweet sorghum at $1.74 while it was estimated at $2.12 for producing 1 gallon of ethanol from corn. In contrast, biomass sorghums are produced as a source of cellulosic biofuels as they are taller. Sorghum biomass yields vary between 15 and 25 t ha-1, but have been reported to be as high as 40 t ha-1 (Rooney et al., 2007; Venuto and Kindiger, 2008). Of particular interest is the well known tolerance of sorghum genotypes to drought and salinity stress which also applies to sweet sorghum. Sweet sorghum is a very robust plant that can thrive under moderate water stress conditions (Steduto et al., 1997), on marginal lands, and with little or no external inputs (Holmseth, 2008; Srinivasarao et al., 2009). It also can be grown successfully in degraded and marginal lands contaminated with heavy metals (Zhuang et al., 2009). Thus, sweet sorghum is well suited for land of low productivity or at higher risk for drought or water logging stress and is unlikely to replace food crops from higher-quality land. Brown midrib (bmr) mutations result in brown vascular tissue in the leaves and sometimes stems and affect cell wall composition. Several independent bmr mutants have been identified (Saballos et al. 2008), and processing of the biomass of some of these mutants results in improved biomass conversion efficiency (Saballos et al., 2008; Dien et al., 2009).For this project, both high-biomass sorghum and sweet sorghum will be tested in the US, while high-biomass sorghum and bmr sorghum will be grown in India. 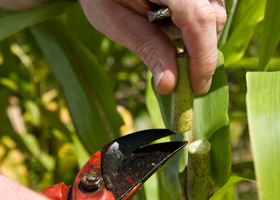