Institute of Food and Agricultural Sciences

From afar, Bivens Arm looks like a lovely urban lake. But on closer look, the water is a putrid green — visible evidence of a lake loaded with nutrients washed into it from runoff. But maybe a different kind of green — money — will become a hallmark of Bivens if the algae can be removed and made into something useful and marketable.
More>>

Washington, DC — The 2019 American Society for Microbiology awards in research, education, and leadership have now been announced...

ASM Award for Applied and Biotechnological Research
Recognizes an outstanding scientist with distinguished research achievements in the development of products, processes and technologies that have advanced the microbial sciences.

GAINESVILLE, Fla. — Sweet sorghum is not just for breakfast anymore. Although sorghum is a source for table syrup, scientists see a future in which we convert sorghum to biofuel, rather than relying on fossil fuel. That potential just grew as University of Florida researchers found three UF/IFAS-developed sorghum varieties could produce up to 1,000 gallons of ethanol per acre. More>>    Research Paper>>

GAINESVILLE, Fla. — As some Florida growers try to find new crops and the demand for biofuel stock increases globally, University of Florida Institute of Food and Agricultural Sciences researchers have found that sweet potato vines, usually thrown out during harvest, can serve well as livestock feed while the roots are an ideal source for biofuel. More>>


UF/IFAS research could lead to more and healthier sorghum

GAINESVILLE, Fla. — A University of Florida Institute of Food and Agricultural Sciences researcher has identified two areas of the sorghum genome that could boost the plant’s resistance to the anthracnose disease. This finding could be a key to expanding sorghum production in the Southeast, said Wilfred Vermerris, an associate professor of microbiology and cell science with UF/IFAS.  More>> 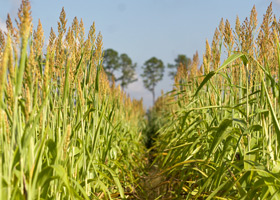